For our first project we decided to build a Raspberry Pi Print Server (OctoPrint) and 3D Printer Monitor using an ESP8266.

This was a project I found on YouTube over the Christmas holidays and began the electronics portion before the printer arrived.  We used an old Raspberry Pi and setup OctoPrint on it to manage job submissions and host a web stream of the printer. 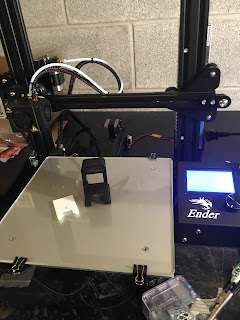 OctoPrint is very straight foreword you can pull an image from the OctoPrint site and burn it to a micro SD card in a few min and follow the setup steps.   For a camera I'm currently using the v2 Pi Camera, but will be adding a Borescope which will be positioned to look closely at the print head to see how the adhesion is going.  Using the wide view camera time lapse of prints can be made.

Now that the OctoPrint server was setup we decided to use an old ESP8266 I had and use it to relay printer information to it as a remote station. This can be moved around the house and just needs a USB wall wart to power it.    The ESP8266 is a Ardunio development board with builtin wifi. Paired with and OLED we are able to see the progress done of a print as well as base plate and print head temperatures.   While it does not provide an image it will allow us to see if there is a temperature problem. Also when the printer is not running it shows the current time and weather.

The instruct able was excellent and we had no trouble following it. 3D-Printer-Monitor-Wemos-D1-Mini-ESP8266. This also proved to be our first real print for the case and it went well. 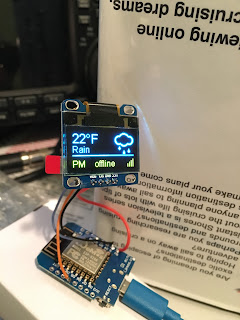 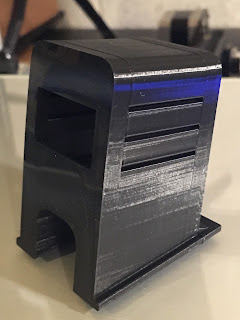 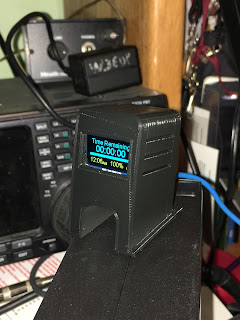 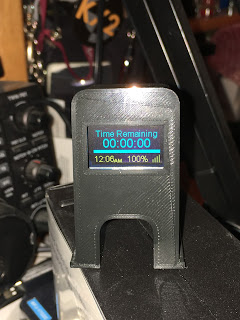